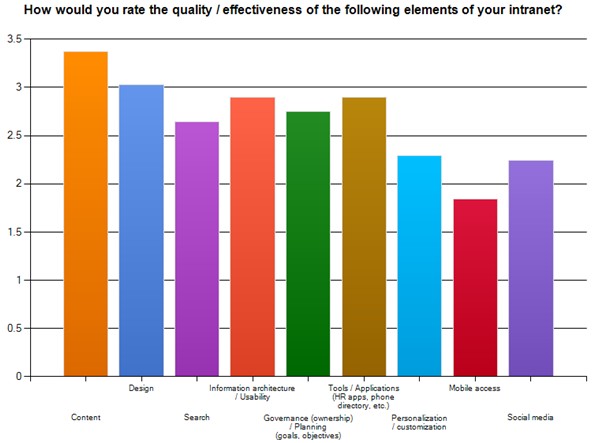 Sometimes, you get what you pay for. In the case of the intranet, you normally get crap.

What do you expect though if you only give the intranet team 1/50th or 1/200th the budget given the Internet team? You get what you pay for.

Of course, for every 10 or 20 crappy intranets, there are one or two good ones – and 99% of the time, they are well funded, and enjoy serious senior management support. These are exceptions to the rule, which is why the current state of the intranet is akin to a refugee project – still alive, but scraping out an existence despite the malnourishment and abuse. It’s a sore lesson that is lived and relived again: the intranet has much less to do with the technology, and more to do with people and process (and the content that flows from these critical requisites). However, people and process still cost money, and it still requires the underlying technology.

The numbers don’t lie: as rated by their own manager / owner (651 respondents to this year’s State of the Intranet Study), the intranet gets a bare pass at 53% satisfaction rating (or 5.3 out of 10). The average intranet is a C-, or a breath away from failure. Ask yourself this, would your senior management team allow the website to look like and operate as a borderline failure, or perform at a level equivalent to a high-school senior who would have trouble qualifying for some community colleges (in other words, heading for a career at McDonald’s or 7-Eleven)? It wouldn’t be tolerated.

If you don’t show me the money, I cannot deliver the Quan (to steal a turn of phrase from Jerry Maguire). And the problem is virtually the same for enterprise social media: a bare pass, or satisfaction rating of 56%. It’s no surprise then to learn that almost half of the responding organizations spent between $0 and $10,000 on enterprise social media.

The impetus is on the intranet manager (or intranet consultant) to demonstrate and prove the value of the intranet. To track and measure the intranet’s business performance, be it in terms of user satisfaction, ROI, sales or employee engagement – and to continually improve it, as the company strives to improve – and demonstrate regular and increasing value. But first you have to add value to measure value, and that often requires an investment of money, which requires… you guessed it, executive support and funding. Show them the value, and they will show you the money.

Many of these issues and lessons were covered in our last webinar, How to Sell an Intranet Redesign to Your Boss. Have a look at the free, one-hour replay, to learn how to better sell the value of an intranet.

Watch How to Sell an Intranet Redesign to your Boss